Remember the Toyotas that allegedly accelerated for no reason? One of those wrongful death cases is finally going to trial this week in California. Toyota has spent a whole lot of money because of this problem. It has recalled cars, and settled several cases already, including a $10 million settlement in 2010 for the death of a family of four. 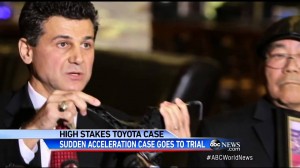 We have short attention spans in this country for news like this. It was big news when first reported, but has faded out of the public eye in the meantime. You know what else we have? Unsafe cars.

OK, so that’s bad enough. But here’s what’s even worse. Toyota recalled the 2007 Camrys to install this brake override. But they did not recall the 2006 models, which is what Ms. Uno was driving.

According to news reports, and to the Uno family’s lawyer, Garo Mardirossian, Ms. Uno was a super-careful driver, who never went fast – until her accelerator jammed, and she ended up swerving around for about a half-mile, at speeds of about 100 m.p.h., before she hit a tree, and died.

The incident began when another driver allegedly ran a stop sign and hit Ms. Uno’s vehicle. That set the incident in motion, because as a result of that collision, Ms. Uno’s foot got jammed between the accelerator and the brake, and rather than automatically braking with the safety system that they have in Europe (and in later Camrys), Ms. Uno’s 2006 Camry accelerated out of control and eventually killed her.

I’ll be interested to see how much money it would have cost Toyota to outfit each 2006 Camry with this safety feature. I’ll bet it would have been less than the value of Ms. Uno’s life.