What is the Time Limit for a Tort Claim Notice? 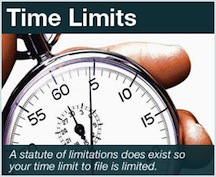 It is not always clear what a “public body” is. If a person works for a city, county, or the state, then it’s pretty obvious. But did you know that OHSU (Oregon Heath Science University) can be considered a “public body” for the purpose of this rule? “Public body” is defined in ORS 30.260, and includes things like “any nonprofit corporation that is organized and existing under ORS Chapter 65 and that has only political subdivisions or municipal, quasi-municipal or public corporations in this state as members.” A lawyer can help you understand when that applies.

Sometimes a fight over whether the Tort Claim Notice requirements apply to a particular defendant have to be argued in court and decided by a judge, because nobody is actually sure. Even if you call a law office, they may not be able to give you a clear answer to this question without some research on past cases.

Childcare agencies, for example, which meet certain standards, count as public bodies as well. If any party that may have been even partially responsible for the death is anything other than a clearly private individual or company, then the best bet is to hire a lawyer early on, way before a year has passed, even if you limit that lawyer’s job to “determining who the defendants are, and whether any of them is covered by the Oregon Tort Claims Act.”

Note that the Tort Claim Notice must be received within the year. Not sent, not postmarked; but actually received. And again, the clock starts ticking on the day of the injury that ultimately caused the death; not on the day of death.

The details on how to send a Tort Claim Notice, what it must include, and who to send it to, are in ORS 30.275, but all of ORS 30.260 to ORS 30.300 should be read and understood, because all of these laws work together to make it difficult to sue public bodies.

The one-year limit for the Tort Claim Notice is not the only deadline that you must follow. In Oregon, under normal circumstances, you have three years to file a wrongful death claim. In cases against public bodies, this time period is reduced to two years. So in wrongful death cases, the Tort Claim Notice must be received within one year of the incident that caused the death, and the lawsuit must be filed within two years of the same date. Attorneys in Oregon recently (May 2013) attempted to show that the three-year period should still apply but the Oregon Supreme Court decided that the two-year limit in ORS 30.275(9) overrides the three-year limit in ORS 30.075(1). If you have an experienced wrongful death attorney, he or she will know and understand these deadlines – and this is one more reason hiring a specialist is important.

There are also limitations on the amount of money that can be gotten from a lawsuit against a public body or its employees. The limitation changes each year to keep up with inflation, and the amount of the limit depends upon when the cause of action “arose,” which usually means when the person was injured. As of July 1, 2014, the limit that a local public body (meaning any public body in Oregon other than the State of Oregon) would have to pay is $666,700 / $1,333,300 and $2,000,000 / $4,000,000.

And finally, there are also specific limits on the amount of money that can be paid for non-economic damages in wrongful death cases generally.