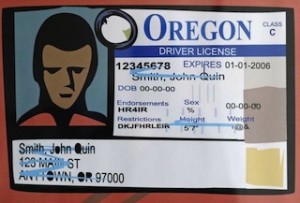 So glad the “Driver’s Card” Bill passed. The bill creates a “driver’s card” that is like a driver’s license except that it can be used for driving ONLY. It cannot be used, for example, to board airplanes, or gain entrance to federal buildings.

I support this bill on public safety grounds, and regardless of your views on immigration, you should too. The reason that we require all drivers to have mandatory insurance coverage is to protect the innocent people that they may hit when driving. It’s not to protect the bad driver who caused the crash; it’s to protect the good driver who gets rear-ended, or the pedestrian who gets run over. Well, the same argument supports the creation of a driver’s card.

As for the counter-argument, it’s hard to know exactly what it is. I can quote Daryl Miller, one of the Top Commenters on the Stateman Journal website, from his comment on this article: “They are not Oregonians! They are illegal immigrants! In this country illegally! Why do they get welfare? Why do they get food stamps? Why do they get free cellphones? Why should they get Oregon driver’s licenses? They are criminals! They are NOT Oregonians!” I suppose that sums up the “against” argument pretty well.

Look, I understand that anti-immigration folk would rather send people back to their home countries than issue them drivers cards. But they should understand that this bill, Senate Bill 833, does nothing to prevent sending anyone back to their home countries. Whether that’s a totally unrealistic pipe-dream, or whether it is actually going to happen, this bill won’t affect the likelihood either way. In the meantime, let’s all make the roads a little bit safer, shall we?