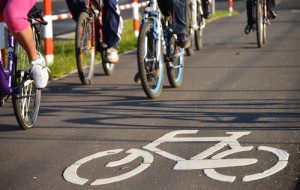 The idea is not to have bicyclists just running red lights at every intersection but it is to bring relief to bikers who constantly find themselves at stop lights that won’t change.

The bill would allow bicyclists to proceed at a red light if the signal “fails to turn green after one full cycle”, however the discretion to proceed is in the hands of the cyclist.

Many traffic lights have sub-pavement sensors that tell lights when to turn green as you drive over them. Bicycles and some motorcycles are not heavy enough to trigger these sensors making it difficult to get some lights to turn green.

The idea for the bill was brought up by motorcyclists who said they would get stuck at lights that kept cycling through without turning green for them. They were forced to make a decision to break the law by running the red light or hold up traffic by waiting.

The original bill only included motorcyclists, but the Portland-based Bicycle Transportation Alliance wanted to include bicyclists as well.

Under the bill, motorcyclists and bicyclists will be held liable when going through a red light if there’s a collision with another road user proceeding through a green light. Rolling through a stop sign is still against the law.

Many other states including Washington already have laws like this one. Other states opposed similar proposals because they believe it is too vague and hard to enforce.