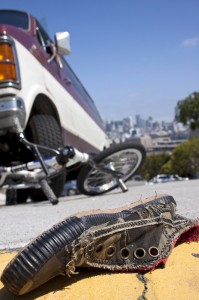 Southeast Portland has one of the highest concentrations of bicycle-car related crashes in the city. Data from the Oregon Department of Transportation’s Crash Analysis and Reporting Unit shows 1,600 reported incidents between 2009 and 2013. Among the top six most dangerous roads for cyclists is Powell Boulevard where 22-year-old Alistair Corkett los his right leg in a collision at Southeast 26th Avenue.

The Oregon Department of Transportation is already talking about $3.8 million in safety upgrades for Powell Boulevard between 20th and 34th avenues by 2017. Some of the plans include more traffic signs, left turn signals onto Powell from side streets, cutting back roadside foliage, and adding lights.

The top 10 and the number of bicycle-car crashes are:

Foster Road is looking at new safety improvements soon, including bike lanes on both sides of the street.

Despite these fatalities, Portland still remains a relatively safe city for bicyclists compared to other larger U.S. cities.  We encourage cyclists and drivers to practice safe driving/cycling practices and stay alert and aware while on the road.