Is an Independent Medical Exam Required? 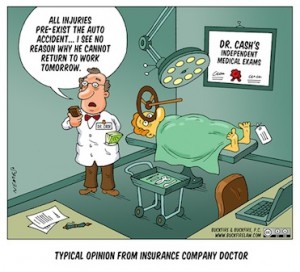 An IME, or Oregon independent medical exam, is a doctor who has not previously been involved in a patient’s treatment and care and is chosen by the insurance company. It’s kind of like a second opinion for the insurance industry – an opinion that they often use to stop paying medical bills.

Although every case is different, it’s generally not good if an accident victim has to see an Oregon independent medical examiner. Ask a Portland accident lawyer for more information!

There are several reasons why an independent medical exam is requested:

That said, the examination will basically be conducted like any other medical exam – the doctor will look at various areas of the body and ask questions. The main focus will be on injuries incurred during the accident, but there is no reason to be nervous as long as you tell the doctor the truth.

If the independent medical examiner finds that the injured person has recovered, the insurance company stops paying the medical bills, and then you either have to pay for the medical treatment yourself or stop seeking treatment.

But as personal injury lawyers, we like to call it a DME, for “defense medical exam.” For those who would rather not get into the debate (and for those who are especially long-winded and have time on their hands), you can call it an ORCP 44 examination because ORCP 44 is the Rule of Civil Procedure that allows insurance companies to request IMEs.

But there’s a big problem with Oregon independent medical exams: They’re not really very independent at all. In fact, a lot of these “independent” medical examiners are quite dependent on the defense teams and insurance companies – and vice versa.

Although the doctors may not have worked with the patient before, they have almost certainly worked with the defense or insurance company, and will probably work with them again. The defense chooses the doctor and pays for the doctor. And that doctor probably makes a decent amount of his or her income from the “independent” medical exams.

Much has been said and written about “independent” medical exams. Most recently, a New York Times article showed how some doctors are basically enjoying early retirement by performing IMEs, and how those doctors’ opinions are severely slanted toward where the money comes from. And a Willamette Week article spotlighted the problem closer to home.

In general, the defense requests an IME with the hope that the doctor will come back with a diagnosis much more in line with what the defense wants to be said. And the doctors almost always do. What that usually boils down to is doctors performing short, poor exams, and then writing up a report that reads, hmmm… surprisingly, a whole lot like the defense’s exact statements. What this also does is continues to give personal injury law and the justice system a bad name.

Essentially, a doctor can be bought.

Fortunately, personal injury lawyers have been able to fight back, and judges have gotten smart to it.

First of all, it’s important to know that IMEs can only be ordered by the court. If a defense wants an IME, it’s only a request. Second, the defense must show “good cause,” or a reason for the exam other than “I don’t want to lose my case, so I’m bringing in another doctor who might take my side.” Often, the defense believes it’s their “right” to an IME, but they would be sadly mistaken.

A good personal injury lawyer will agree to the exam – but only under certain conditions. For example:

A good personal injury lawyer in Portland also often will not take the time to fight the exam, just because we can discredit the doctor’s opinion during cross-examination.