How Do I Calculate Lost Wages? 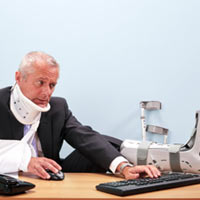 Let’s say you’ve been involved in a serious accident, and it wasn’t your fault. However, as a result of the accident, you’re not going to be able to work again for a very long time. The doctor says “maybe never.” How do you go about calculating how much you and your family are going to lose out on in lost wages?

If you’re a salaried employee and already know that the two weeks you missed after the accident are all the wages you lost out on, the calculations are relatively easy. Where things become complicated, and where you may wish to consult an experienced personal injury attorney, come when you’ve been out of work for a while, and you’re unsure when you’ll be able to return to work, if ever. In the meantime, the at-fault party’s insurance company is putting pressure on you to accept a number that you’re not sure is quite fair.

Let’s start with the easy situation, providing only that there are no other complications. If your situation is something like:

In these cases, the insurance company won’t argue with you. Once liability has been admitted, you will be paid $1,200 as compensation for your two weeks away from work, even if it was taken out of your vacation or sick-leave entitlements.

If you need to miss more than two weeks, the calculations are done the same way, and all the insurance company will require is confirmation from your doctor, your employer, and possibly copies of your pay slips to calculate lost wages.

The accident was a bad one, and you have been out of work since. Neither you nor your doctor knows if or when you will be able to get back to gainful employment, and it’s also not a sure thing your boss will hold your job open for you indefinitely. How does the insurance company figure out how much to offer you as compensation for lost wages?

Remember, the insurance company will not view your case compassionately or in your best interests. Instead, you and your attorney will have to put together a realistic, viable figure that is fair to you and your family, and which the courts (if it goes that far) will accept as genuine.

Apart from wages, you could conceivably lose out on—and claim for—things like:

What if by the time you’re able to return to work your job is gone and to support your family, you have to take a lower-paying job. Now you have to factor in things like:

What If I’m Never Able to Return to Work?

If your injuries are severe enough, or if they affect the skill set you used to make a living to such an extent that you will probably never be able to work again, you and your accident attorney in Portland will need to factor in an enormous number of variables to determine what you and your family have lost out on financially.

This may require additional legal firepower in the form of a forensic economist and/or a vocational rehab specialist—an expert who can convincingly analyze and calculate data that accurately assesses your lost earning power and calculates lost wages. Factors to be considered will include:

Once all these things are entered into spreadsheets and analyzed, the forensic economist and your attorney will present an economic model to a judge or jury to show what you have been denied in terms of future earnings. They will refer to life expectancy tables, the earnings of others with qualifications and education similar to your own, as well as things like anticipated inflation rates based on historical trends. The insurance company, naturally enough, will produce their own experts to refute the claim if they feel it is too high.

If you’ve been injured in an accident that wasn’t your fault, you’ll be understandably upset. You’ll also be worried that your family is going to suffer financially due to your own medical bills and the fact that you’re unable to go out and earn a living as you normally would.

In such cases, never be pressured into accepting a settlement from the at-fault individual’s insurance company, no matter how fair it seems on the surface until you’ve spoken with a highly experienced Portland injury attorney who is used to dealing with insurance companies in all types of personal injury cases. A good personal injury lawyer will advise you as to your rights and can tell you what to expect from the other side. Then, if you decide to proceed with a claim, your attorney will provide the expertise and guidance you will need to get the result you and your family deserve.